I'm fortunate to be in the field of typography that I love surrounded by colleagues whom I admire. I'm constantly learning from the "shop talk" conversations that happen at type conferences, on Twitter and via e-mail. I met Tiffany Wardle de Sousa at the University of Reading 15 years ago when we were both working toward our masters degrees in typography and graphic communication, and we've remained close ever since. This is the second in a series of conversations about typography in design, where Tiffany and I look at current type trends, and give them a thumbs-up or a thumbs-down.

Tiffany Wardle deSousa: I've noticed in the last few years that designers have taken the nuts and bolts of letterpress printingâ€”type, image, furniture, all locked up in a chaseâ€”and applied it to everything from posters to logos (whether it stylistically makes sense or not). A few of us have been referring to the style as "type lock-ups."

Dr. Shelley Gruendler: I've been noticing it but hadn't ever actually articulated it enough to come up with a name. Your descriptor "type lock-ups" is perfect.

TWD: We coined the phrase when I judged a typography competition because we saw it everywhere.

SG: I wonder how many of these designers and typographers have ever set type on a press?

TWD: Or even know what they are mimicking? There is nothing wrong with applying it, per seâ€”but I think you should know where your inspiration comes from. Understanding your inspiration helps you make better design decisions.

SG: So let's look at a few examples of this lock-up look in typography and see how it works (or doesn't). 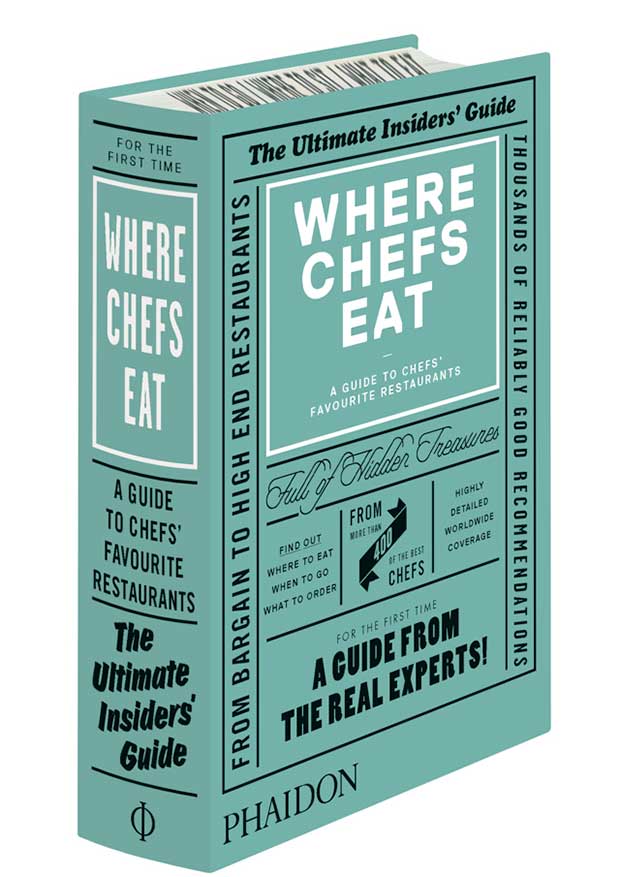 SG: I saw this Phaidon book cover (above) a few months ago in a bookstore and actually took a photo of the printed page ends. The cover certainly stood out from the other travel books (it's not shelved in the food section), but I don't think it's an award winner.

TWD: I suppose if they were going for a diner sort of menu style it works on that level. Diners are trendy right now and most diner menus are awful. The type choices are all over the place in regards to any sort of reference to a specific time. Maybe someone wanted this type lock-up look, but I'm not sure it was the right solution for the design problem.

SG: That center italic monoline makes me crazyâ€”it's far too strict and rigid and not appropriate for this look, nor for this subject. The type needs much more refinement. Perhaps the reason this cover doesn't work so well is because the space wasn't used well enough.

TWD: Yes. Space first, type second. They could have tightened up the spacing a bit more; it feels more like floating blocks of text that don't really lock up at all. They might have spent so much time selecting typefaces that they ran out of time to really get it to work. I'll give them the benefit of the doubt.

SG: Perhaps they designer was simply looking to fill the space instead of going for the lock-up look.

TWD: It's a designer's urge to have everything fit together like a puzzle.

TWD: More like OCD! It is a strange urge, to fill the page in such a way, but it is orderly and we designers love our order.

SG: It is easy to do, but difficult to do wellâ€”as is nearly everything in graphic design. 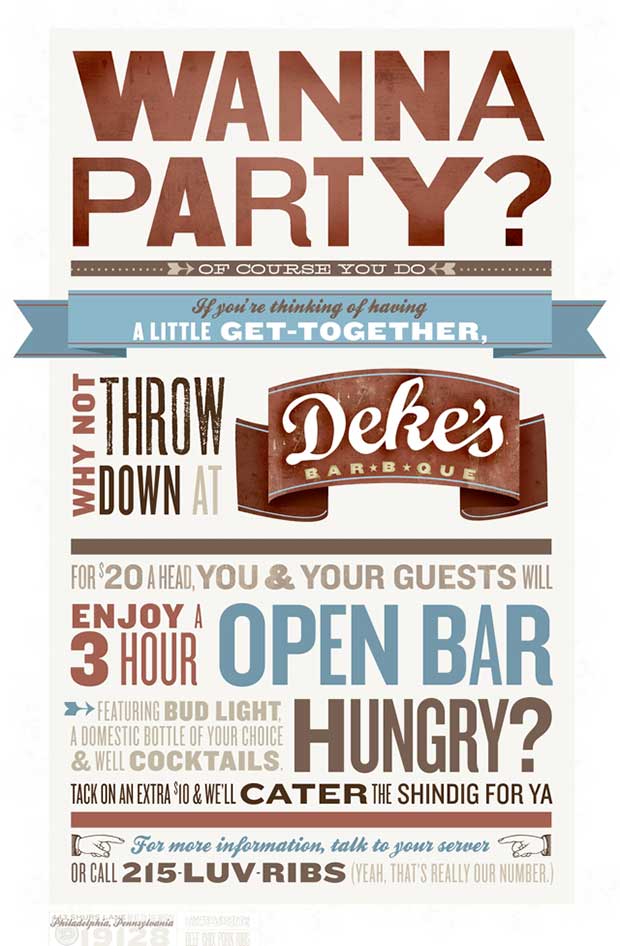 SG: This invitation (above, by designer Jennifer James) feels like a true wood-type composition with the differing weights and widths of the letters. I find it refreshing that designers prefer a make-do approach to wood type where if you're missing letters, not only is it no big deal, it's actually preferred.

TWD: I agree: This is an entirely appropriate example of borrowing from the vocabulary of the lock-up, whereas many other designers use the style as a crutch or a lazy trick.

SG: The use of color and the division of space really communicates the lock-up look.

TWD: Exactly. The space is even around and within each bundle. Also, the designer chose a typeface that has enough variety of widths and weights so that the typographic layout doesn't become static at all. The colors and typeface play into the idea of a BBQ. It just feels like a BBQ party. 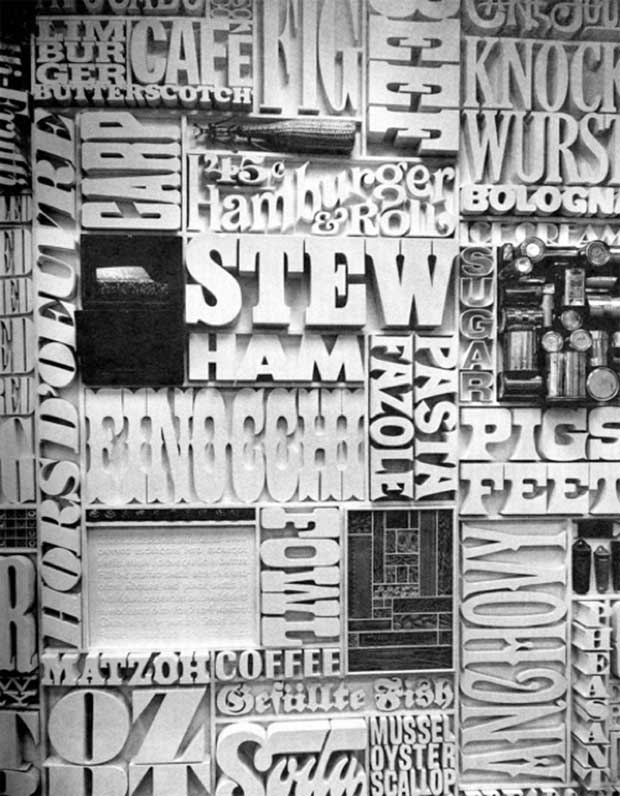 SG: You know what I think is the best example of the lock-up look? The awesome typographic wall (above) that Lou Dorfsman designed for the CBS cafeteriaâ€”the wonderfully named "gastrotypographicalassemblage."

TWD: The queen mother of all type lock-ups! Lucky for him he hand-lettered each block to fit so his spacing could be flawless. If I wanted to be pedantic, I'd say this wasn't type at all, it was lettering.

SG: Who cares if it's lettering or type? It's masterful! Good typography is about the articulation of the space, as much as it is about type â€¦ or letters.