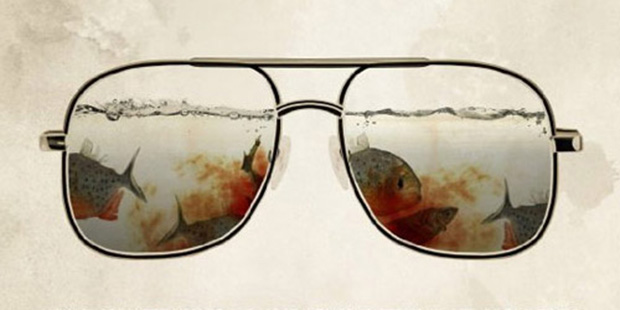 I guess The Rolling Stones were right. For most episodes of ScreenFonts every single request for a micro-interview is honoured. This time however the two studios I contacted for extra information about their posters initially agreed, but eventually never replied. I guess when you're busy creating new artwork you have little time for answering a question or two about previous artwork. But even without information coming straight from the horse's mouth there's still more than enough goodies to be discovered in this instalment. 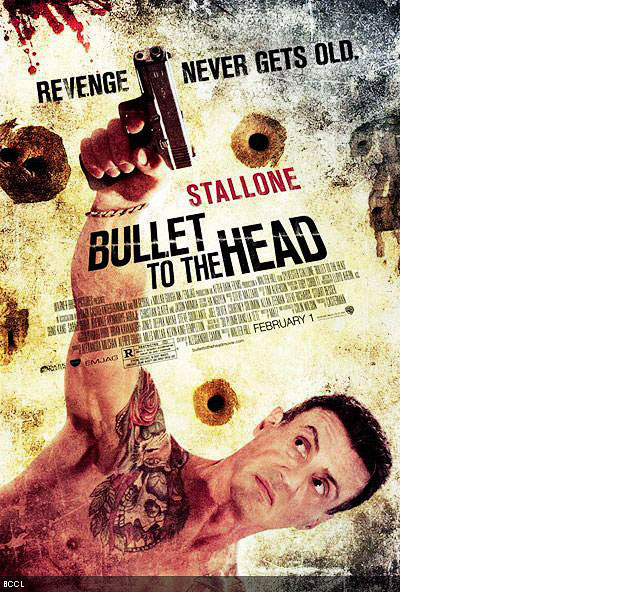 For example there is a whole story to be imagined behind the posters for Bullet to the Head. On a purely formal level lets look at the different title treatments. In this version it seems an attempt was made to project the typography in a perspective similar to Sylvester Stallone's arm holding the gun from the movie title. Unfortunately the designer may have misinterpreted the direction of said arm. Either that, or he/she made the decision to have the condensed grotesque inclined backwards, moving away from the viewer, whereas the arm is pointing slightly towards the viewer. The result looks a little awkward: the typography counteracts the motion of the arm, bringing it to a standstill. And if this was intentional it still doesn't create enough of a virtual wall for the arm to break through.

Although I usually like some texture for making a poster look gritty, here it simply is too much. Plus the giant bullet holes and blood splatter in the upper left-hand corner make the whole thing look cheesy. 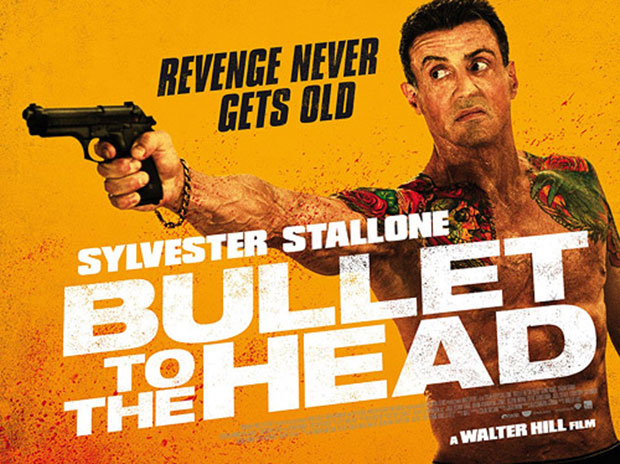 This horizontal design has the typography more in harmony with the image. The black extended weight of Neue Helvetica is custom-tilted to have the verticals run parallel with the sides of the poster â€“ the characters are less sloped than the oblique. The downwards slope in the letters runs parallel to the axis of Stallone's shoulders, with his hand holding the gun pointing over the movie title. Strangely the other big type is from another family: the squarer Compacta. Even though it's less conspicuous than the splatter in the previous poster, I find the fine blood mist (also seen on the next poster) exploding all over the poster from the lower left-hand corner gruesome, even a little unsettling. I'll explain why immediately below. 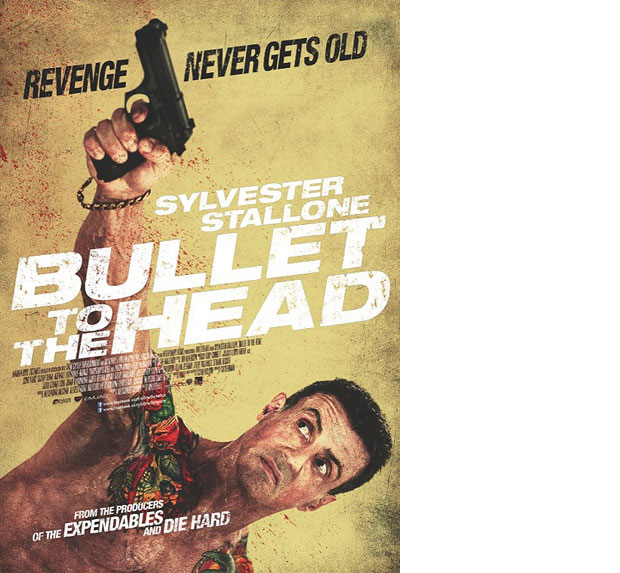 The vertical variant of the same design again displays problems in the typography department. Here the 'correct' oblique version of Neue Helvetica 93 Black Extended was used, but neither the vertical angle nor the horizontal one make any connection with the image nor the borders of the poster.

On a conceptual level the combination of the gun and the fine blood mist is very wrong. It suggests the brutal shooting of a character just outside the confines of the poster canvas. Given the origin of the blood mist, one would think the character is down, shot in the head (what, the film title wasn't enough of a clue?). Now, the posters for this movie were released around the same time as the Sandy Hook Elementary School shooting in Newtown, Connecticut on December 14, 2012. Even more so than so many other posters for action movies, the bare-bones design and Sylvester Stallone's pose stylizes and glorifies gun violence, making it look cool and powerful. This aspect of the entertainment industry has been, and continues to be heavily criticized, especially in the aftermath of this and previous shooting tragedies. 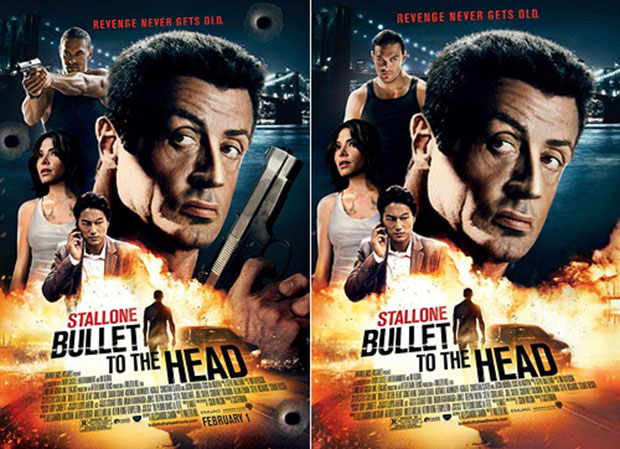 I couldn't find any hard evidence, yet I am pretty sure the backlash of the Newtown tragedy must have had some repercussions with the film studio. The two designs above seem to indicate that. What I think to be the main poster exists in two almost identical yet radically different versions. The original one, released before the Sandy Hook Elementary School shooting, has two actors holding/pointing guns and features three gratuitous bullet holes puncturing the canvas. The 'corrected' poster released after the dramatic incident has all guns and bullet holes removed. Was this other version already planned, for example to be put up for display in sensitive locations, or was it tailored to stop the general audience from making connections between the posters and the shooting? I guess we'll never know.

On a more light-hearted note, and not to diminish the human tragedy of these mass murders, this slightly naive initiative to counteract the glorification of guns in the film industry and turn it into something positive made me smile. 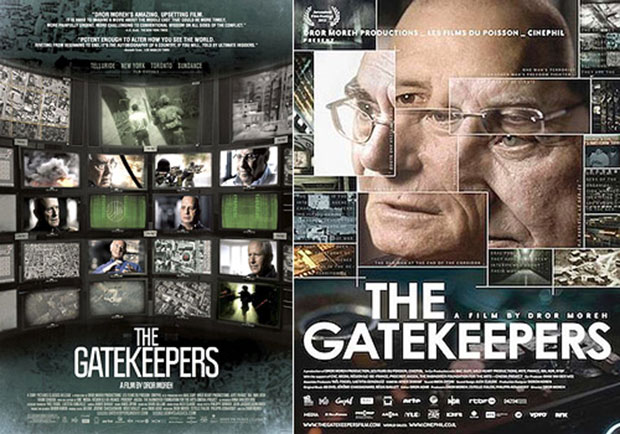 The Gatekeepers is a documentary featuring interviews with all surviving former heads of Shin Bet, the Israeli security agency whose activities and membership are closely held state secrets. The movie poster exists in two versions. One is pretty unimaginative â€“ a monitor wall alternating portraits of the interviewees with security footage and images of military interventions. Been there, done that, bought the T-shirt. The other version deals with the subject of the documentary in a much more interesting way. The multi-faceted and largely hidden story is almost literally translated into a fractured, then re-assembled image. Showing only image fragments that in turn obscure parts of other images, never revealing the whole story, accurately echoes the secretive world of espionage. 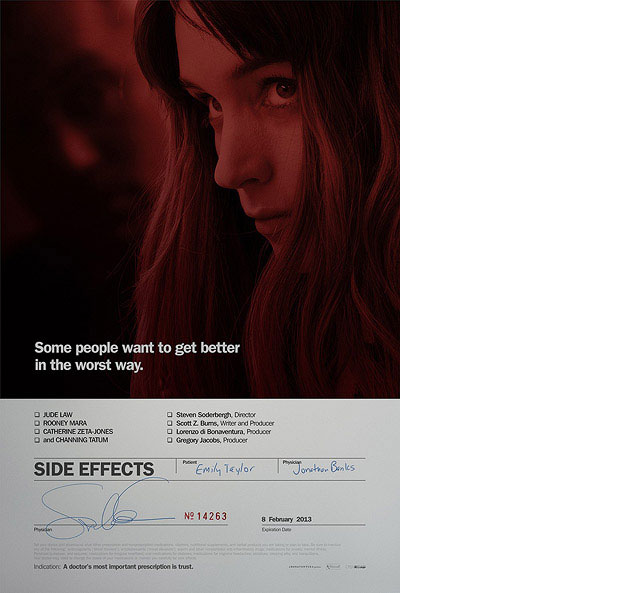 Another rather bland main poster, another much more appealing alternate poster, this time for Side Effects. Without trying to make a direct copy of a doctor's prescription â€“ something lesser gods would do â€“ Kellerhouse expertly assimilates its graphic language and typography to create something new yet instantly recognisable. (Recent visitors to Fonts In Use know why I am partial to this kind of design strategy). Every single detail works. The Modernist setting of ITC Franklinâ€Š/â€ŠITC Franklin Gothic creates a functional, attractive, and very readable grid. Every bit of textual information gets assigned to a graphic element that is identifiable as a part of a doctor's prescription. The doctor's signature and handwriting in blue ballpoint pen and the red stamp add some authenticity while loosening up the overall image. The dark red monochrome photograph make the crisp pale grey tagline and lower part of the poster sing. Quiet and unassuming, with lots of attention to detail, this is a maddeningly well-designed, clever poster. 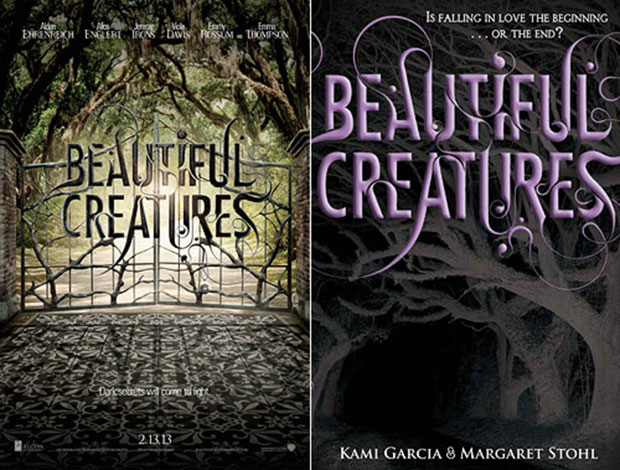 Don't get me wrong â€“ I admire the delicate additions of hand drawing to typography in most of Si Scott's work, but his title treatments for the Beautiful Creatures series of novels (original cover pictured on the right) come across like poor man's renditions of Marian Bantjes' stunning lettering art. Maybe it is because Si used Futura Condensed as a starting point, and my dislike for this typographic mishap (don't get me started) skews my perception. The connections and additions look a bit clumsy to me; the bottom of the 'B' simply is misshapen. My main criticism is the laborious art direction by Dave Caplan. Pairing the 'amazing photograph by Robert Clarke that captured a row of old Live Oak trees covered in Spanish moss' with 'an equally expressive and moody type treatment' is not arresting, it is confusing. The tendrils in the lettering clash with the similarly complex texture created by the branches, resulting in a messy, mismatched image. Let the lettering speak for itself (and certainly don't apply that stomach-turning purple embossing to it, ughâ€¦), or pair the intricate latticework of the twisted branches with pared-back, balanced typography. But not this.

As for the poster for the film adaptation pictured on the left, it has Si Scott's lettering in front of a wrought iron fence, with a patterned tiled floor (?) in the foreground and a driveway lined with tortuous trees in the background, making the problem exponentially worse. 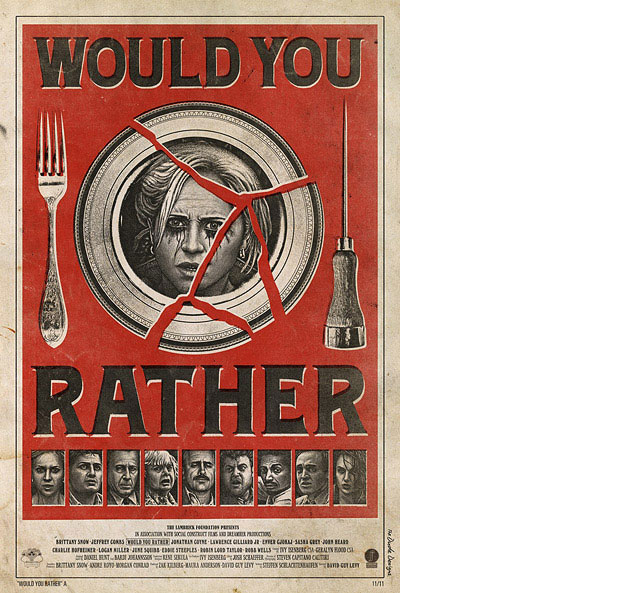 ScreenFonts already spotlighted Tom Hodge's work in the past â€“ you may remember his posters for Hobo With A Shotgun and The Innkeepers. This time he designed a teaser poster for the torture porn flick Would You Rather. Director David Guy Levy calling the story 'Funny Games meets Clue' pretty much set the direction for the design. Although the plot mainly revolves around Brittany Snow, there are nine guests at the table. Trying to fit them all in the poster plus focusing on Coombs and Snow would have produced a messy design, so Hodge used the old 70s disaster movie star fest technique of having the actors or 'guests' laid out in a row of boxes at the bottom. Hodge says the atmosphere of the poster is inspired by old Polish posters and Swiss 'Plakatstil' of the 60s, while also referencing the modern minimal icon posters. As a clean-edged poster would not accurately reflect the dark nature of the movie, Hodge gave it an old screen-printed treatment, complete with the colours out of registration, for a more sinister and unnerving edge. The thorn serif movie title seems hand lettered. 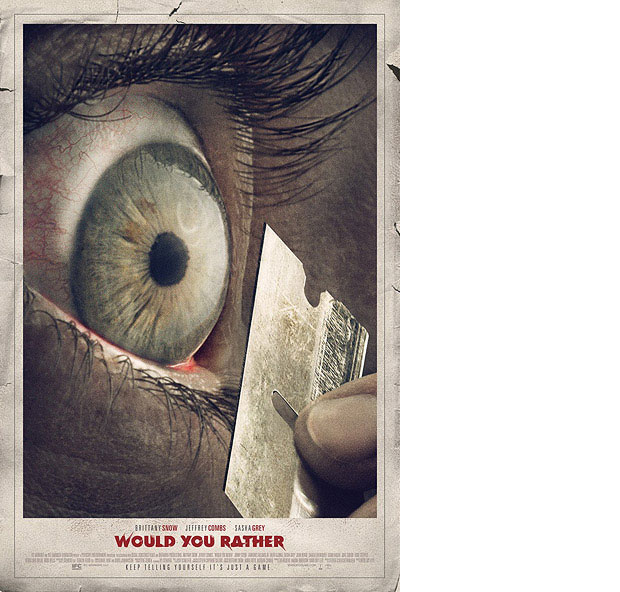 The main poster strengthens my conviction that poster artists working for the entertainment industry need to follow mandatory anatomy courses. What a freaking giant eyeball we have here. Futura Extra Bold was used as a basis for the heavy sans serif title treatment. 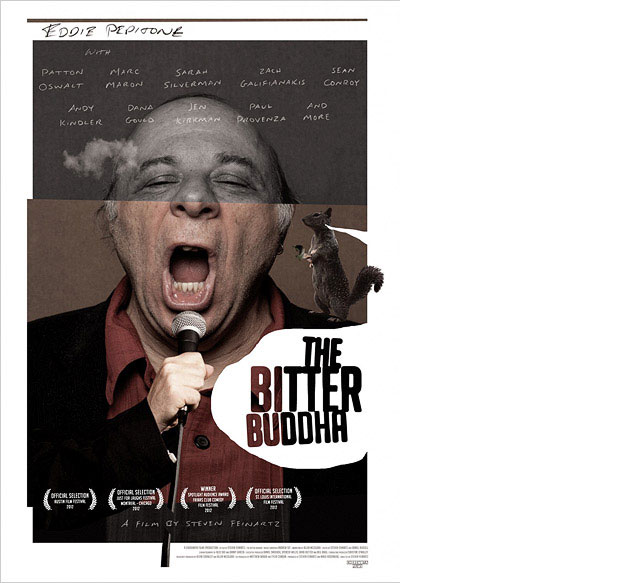 Given the leftfield treatment of the movie poster for The Bitter Buddha, I think in this particular case the disproportionally small hand holding the microphone may have been intentional. I love the colour/black-and-white divide and the random squirrel spelling out the film title (set in a worn sans serif) in a text balloon. 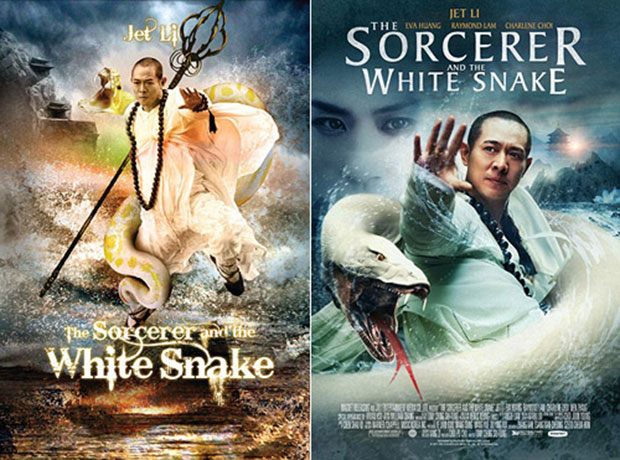 I sense some cultural confusion in the poster on the left for Bai she chuan shuo (The Sorcerer and the White Snake). The Tuscanized Century-style serif free font Bleeding Cowboys gives off an almost cliche Wild West vibe (as if the name wasn't enough of a clue), which makes it a puzzling choice for an Asian martial arts film. Baker Signet, used in the poster on the right, is more in tune with the Asian theme. The fluid strokes in the flared almost-serif echo Asian calligraphy and convey the right atmosphere. 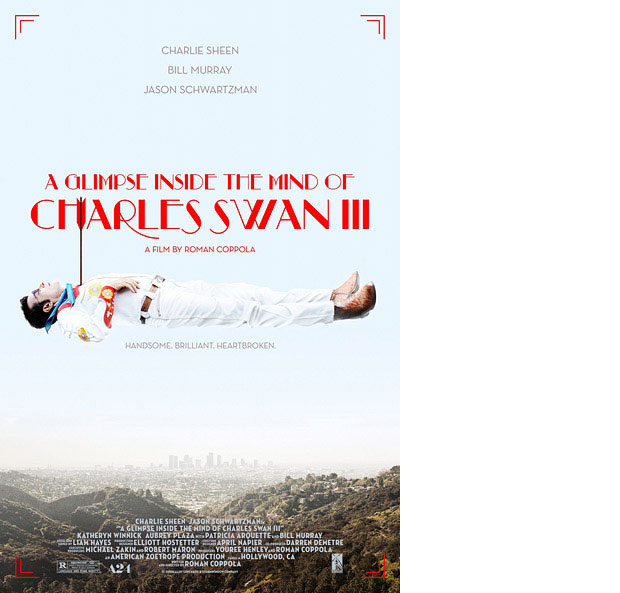 A Glimpse Inside the Mind of Charles Swan III is set in a stylized Los Angeles in the seventies, and has a poster series impregnated with the typical Art Deco atmosphere. This is reflected in the typography, mostly typefaces by type designer Nick Curtis who specialises in vintage-looking typefaces and revivals of period designs. The poster above features Raconteur NF, his Art Deco typeface based on lettering in a 1923 ad for Piera Nova, designed by Hernando Gonzallo Villa. 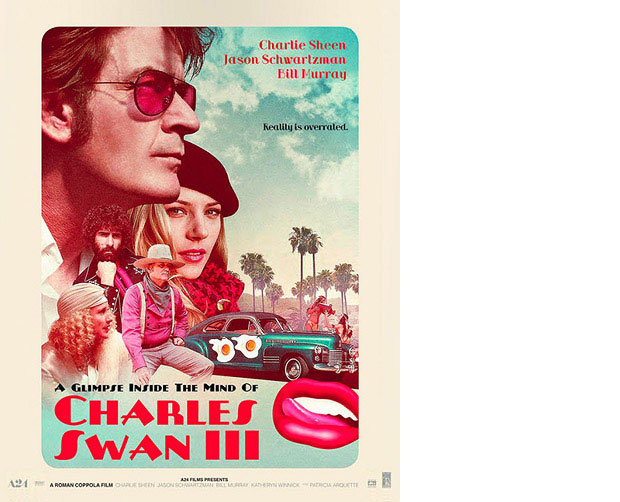 The imagery in this alternate design clearly defines the seventies setting of the movie. This is enhanced by the washed-out colour palette reminiscent of photographs of that decade which are found again after forty years. The chunky display sans is Plug Nickel Black, another Art Deco-inspired design by Curtis. 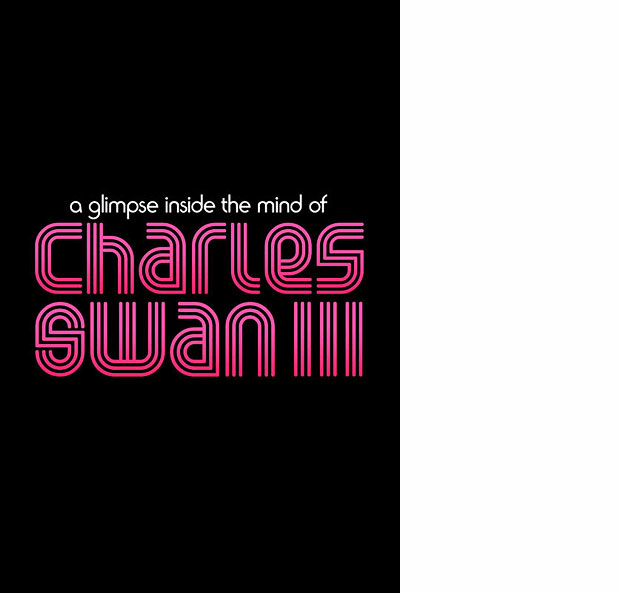 This purely typographic design does away with the Art Deco references, conjuring up the seventies time period with a multilinear neon-like disco typeface. The supporting typeface is the typical seventies design ITC Ronda, a Bauhaus-inspired geometric sans by Herb Lubalin. 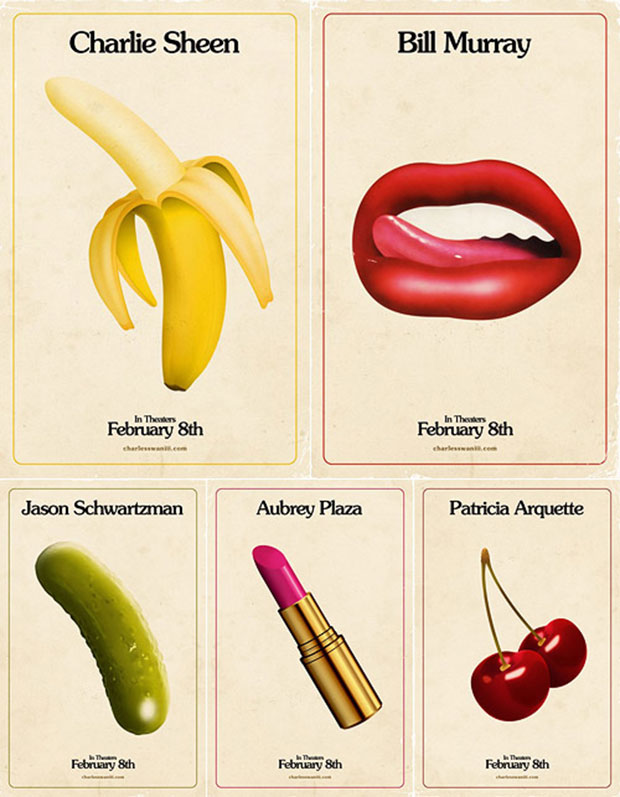 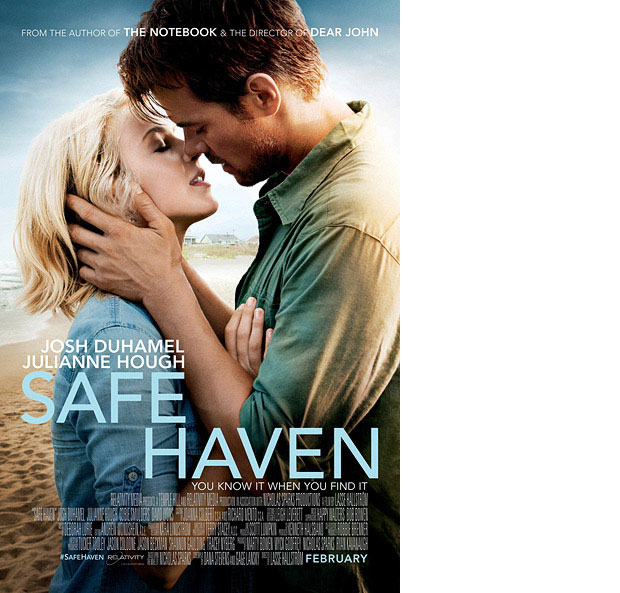 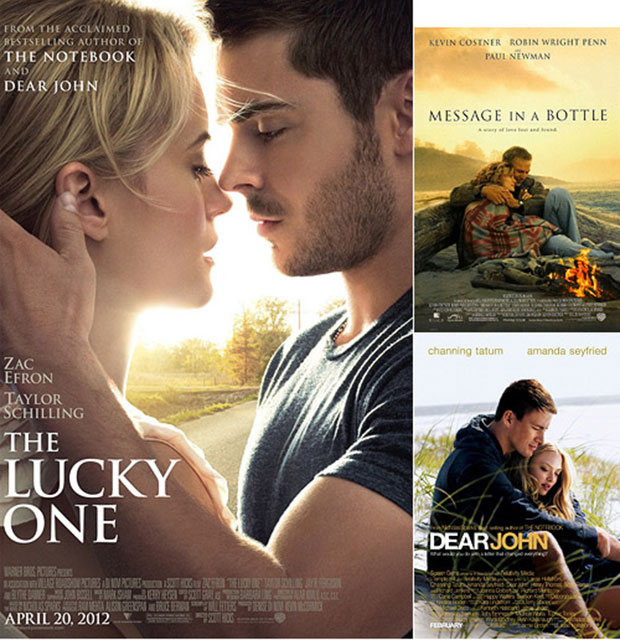 I could once again make fun of the movie posters for films based on Nicolas Sparks novels, but frankly they are too easy a target. The very familiar design for the most recent one Safe Haven gets added to the hall of shame I created last year. No, that's not 'H&FJ Gotham', 'Proxima Nova' nor 'ARS Maquette', but Adrian Frutigerâ€™s timeless classic Avenir.

We end this episode with two chilling designs (you can always count on me for lame puns) for The Jeffrey Dahmer Files. The main poster deftly avoids horror movie cliches by showing the inside of an immaculately clean, empty refrigerator. The absence of gory details and the realisation what this images symbolises is far more effective and far less insulting towards the intelligence of the audience. It's funny this design comes across as very literary, because the narrow sans is Alternate Gothic, one of the most used typefaces in contemporary American book cover design. 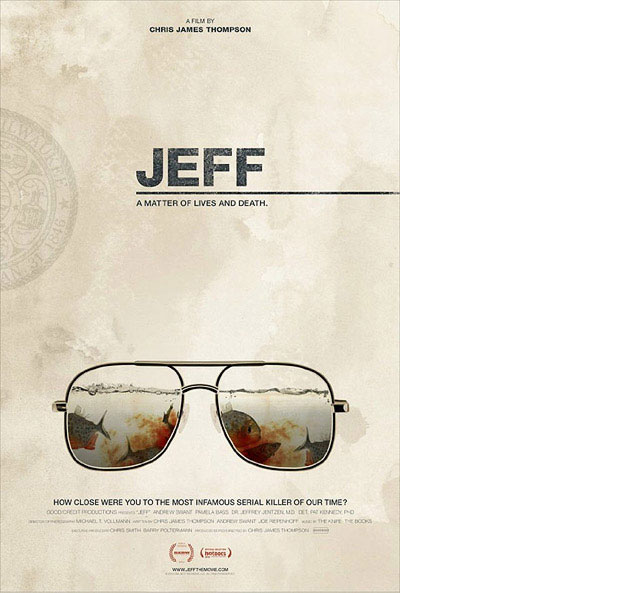 The alternate poster is even more subtle. Piranhas reflected in the sunglasses symbolise the predatory and cannibalistic nature of the serial murderer. Two successful high-concept posters to round off this month's selection.